Galvanized steel pipe is a steel pipe that has been coated with zinc. This coating protects the steel from corrosion. It is most commonly used for outdoor construction like fences and handrails, or for some interior plumbing. It is also sometimes called galvanized iron pipe.

The process of galvanization was first discussed by scientists in the 1770s, nearly 60 years before it was finally introduced in the 1830s. French engineer Stanislaus Tranquille Modeste Sorel took out the first patent for the process in 1937, and began manufacturing it soon after. By the 1850s, Europe was producing galvanized steel out of manufacturing plants located around the continent. The United States followed shortly thereafter, opening its first plant in the 1870s.

To create galvanized steel pipe, steel materials are placed into a molten bath of zinc. This process is also called hot dip galvanization. The two metals are chemically bound to one another in this process, and will therefore never separate, resulting in a more resistant and longer lasting version of steel.

This type of pipe is not suited to gas lines, but was very commonly used for full, in-home plumbing until the mid- to late 1900s, when copper replaced it as the pipe material of choice. It was discovered at that time that lime scale buildup occurred faster in galvanized steel pipe than in copper or plastic. It is still sometimes used indoors for plumbing, particularly for the replacement of small areas of pipe, in which the flow will not be greatly interrupted by sections of lime scale.

Outdoor applications are a more common use of galvanized steel pipe in the modern age. It is most likely to be seen on chain link fences or handrails. It is highly resistant to corrosion, which makes it a perfect choice for goods or materials that will be exposed to the elements on a regular basis.

Galvanized steel pipe is generally connected by threads on either end of a length of pipe. A small amount of adhesive is typically placed on the threads before screwing them together, in order to reinforce the connection. If no threads are available, the pipes and fittings can be welded together, although caution should be taken because the heat from welding can release dangerous zinc fumes into the air. Pipes can be cut using a cutoff saw or hacksaw. 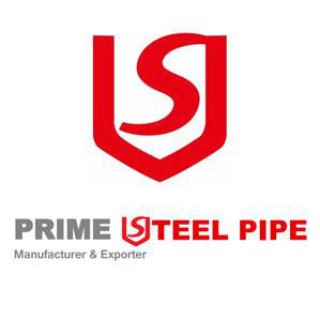 HUNAN PRIME STEEL PIPE is the export gateway of SHINESTAR HOLDINGS GROUP. We are dedicated in providing and exporting high performance-price ratio welded & seamless steel pipes and fittings covering various steel grades. At Prime Steel Pipe, we believe that honest communication, expertise in our industry, and prompt execution lead to strong long-term relationships. Our professioanl team provides " one-stop procurement" servics to coordinate with your project regulation, site and terrain, and ensure the best quality of products by assigning skillful experts at every stage of production. Our principles is to keep the honesty in mind, to win reputation by trust. We strives to providing quality products, competitive price and value-added services to our clients throughout the world.